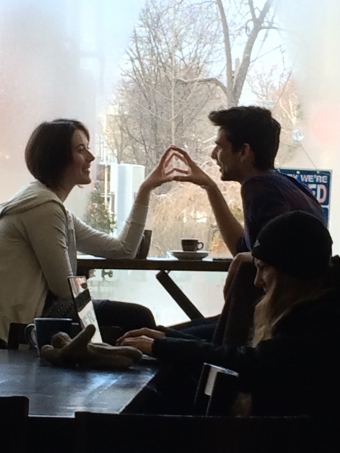 I took this picture of a couple in a café window…chatting, touching, smiling and connecting. They were in their own world, a separate bubble, fully enthralled with each other's company. They seemed quite unaware of the rest of us who were witness to and enjoying their connection.

Their hands were touching the whole time…dancing, moving, playfully pushing and pulling, communicating with each other, expressing a whole world of meaning.

“You're very important to me. I'm attracted to you. I like how you feel. You make me laugh. I feel special to you. I want you close to me. Let's play" and so on.

Their eye contact, physical touch, verbal cues, sounds and language, facial expressions, body language and spatial proximity all spoke of how important she was to him and vice versa.

There was a moment when their hands came apart and at that time the male brought his own hands together and continued the touch and movement with his own hands until she reached out and reconnected with her hands to his. There was such affection, tenderness, sweetness and softness emanating off of them, filling the room. But not everyone noticed.

In the photo there is a woman in front of them, working on her computer, with a concentrated frown on her face, focused on her screen, oblivious to their presence or her surroundings. She was missing the sparkle, the delight, and the energy of close proximity sweethearts.

I am reminded of another situation on another day at another café. I was lined up for a latte and saw a young couple sitting at a table with a 6-month-old baby boy. The baby was sitting in his mother's lap, gazing across the table at his father. His father was working on his iPad and his mother was on her iPhone. Both were concentrated and disengaged from each other and the baby.

In that situation, the infant has both parents with him, physically, but neither is 'present' or emotionally available to him. He is 'bonding', in that moment, with no one. He stared at his dad staring at his screen.

Neither of his parents engaged with him or acknowledged his presence at all for quite some time….maybe 7 minutes (it was a long line up.) We also know that a child's experience of time is very different from ours. What feels like a moment to us can be an eternity to a child.

Hopefully that was an isolated experience for that child but I'm guessing it isn't and that the parents just aren't aware of what they are doing (or not doing) or the potential impact it might be having on their child.

They are shaping his sense of attachment and connection, which ultimately creates in him his sense of self-worth, value and love.

So there are moments of deep, delicious connection all around us as well as moments of isolation and detachment. We can shape our own experiences of attachment and connection with our consciousness and awareness.

Try lighting up when you see your 'significant other' as he or she enters a room. Touch them, have a hand dance with them in a public place, whisper sweet nothings in their ear and engage with them. Acknowledge how valuable they are to you using non-verbal communication. See what a difference it makes to both of you.