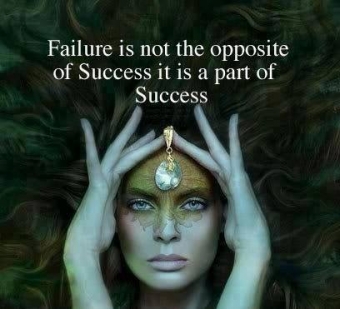 No one likes to fail, but some people handle it a whole lot better than others.  Having worked with actors for many years I saw how important it was for an auditioning actor to develop a healthy resilience to rejection and failure in order to survive in the acting world. For every audition they were chosen for, there were dozens they weren't.

How actors deal with failure, rejection and disappointment determines whether they will continue to work or not. Resilient individuals seemed to develop a buffer between themselves and the people who are judging and assessing them.  They don't take rejection personally.  They may not have landed the role because they were too tall, not tall enough, too old, not old enough, wrong gender, etc. etc.

I also know people who were rejected once by one self-serving jerk of a boss and they quickly left that area of business all together. Up to that time they had been excited and passionate about the work and held hope for a future in that industry. Instead they left feeling defeated, shamed, humiliated, embarrassed and an overall failure. They personalized it to their core.

Such a loss is experienced of the enthusiasm and passion that was present in the beginning.  So much power given to another who doesn't deserve it.

How do we build up our reserves for resilience and learn to take rejection impersonally.

How do we stand behind our passions and forge ahead especially when the outer world seems to be putting up roadblocks to our success?

These are important skills to develop especially in this world of ever-changing employment opportunities where many are called to create their own business opportunities.

Can you flow with the changing times and connect with your resilience?