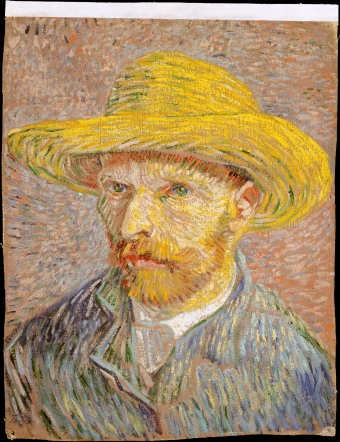 This is taken straight for Brain Pickings, a site I enjoy.  It's at www.brainpickings.org. The full title of the post is 'Van Gogh on Heartbreak and Unrequited Love as a Vitalizing Force for Creative Work.'  I thought I'd pass it along.

It is when life bends us to its will and we don’t break that we learn what we are made of — nowhere more so than in heartbreak, that outermost extremity of the discomfiting principle that frustration is essential to satisfaction in love.

In the summer of 1881, while visiting his parents, Vincent van Gogh (March 30, 1853–July 29, 1890) fell in love with a woman named Cornelia Adriana Vos-Stricker — a beautiful, recently widowed young mother. Cornelia was touched by Vincent’s kindness to her little boy — Van Gogh had a great affection for children — and a friendship developed between them. But it was quickly warped by romantic lopsidedness — Vincent fell passionately in love with Cornelia, who was too raw with grief to open up to the possibility of a new life. Not wanting to hurt his feelings, she rebuffed him gently yet firmly. But like any hopeful lover confronting hopelessness, Van Gogh warded off dejection with denial and, mistaking her gentleness for ambivalence, led himself to believe that he still had a chance if only he tried harder. (Most human heartbreak stems from this half-arrogant, half-naïve tendency of ours to believe that we can change the course of events and the feelings of others by bending, twisting, and exerting ourselves a little bit more, as if the entirety of their free will was a function of our own actions.)

Although Van Gogh’s infatuation ultimately ended in heartbreak, in the process of working through it he found himself and his art came alive in a new way — a beautiful and poignant reminder that our sorrow and our creative vitality spring from the same source.

In a touching letter to his brother Theo from September of 1881, found in Ever Yours: The Essential Letters (public library) — the same treasure trove that gave us the beloved artist on principles and how inspired mistakes move us forward — 28-year-old Van Gogh writes,

"This summer a deep love has grown in my heart for [Cornelia], but when I told her this, she answered me that, to her, past and future remained one, so she never could return my feelings. Then there was a terrible indecision within me what to do. Should I accept her “no, never never,” or considering the question as not finished or decided, should I keep some hope and not give up? I chose the latter.
And up to now I do not repent of that decision, though I am still confronted by that “no, never never”… For myself [I have] kept some courage… I hope to continue to do so, and to keep melancholy and depression far from me, meanwhile working hard, and since I have met her I get on much better with my work. (...) It is no unreasonable or unjust desire to wish that [she] and I might see each other, speak to each other, and write to each other, in order to become better acquainted, and in this way to get a better insight into whether we are suited for each other or not… I hope not to leave a single thing undone, that may bring me nearer to her, and it is my intention:
To love her so long Till she’ll love me in the end."

Four days later, Van Gogh writes to his brother again, even more resolute in his decision to keep hope alive:

"There is a love serious and passionate enough, not to be chilled by many “no, never nevers”… For love is something positive, so strong, so real that it is as impossible for one who loves to take back that feeling, as it is to take his own life… Life has become very dear to me, and I am very glad that I love. My life and my love are one."

Torn between compassion for Cornelia’s grief and agony over her refusal to open her heart to him, he adds:

"In that inexpressible anguish of soul, rose a thought in me like a clear light in the night, namely this: whosoever can resign himself, let him do so, but he who has faith let him believe! Then I arose, not resigning but believing, and had no other thought than “she, and no other”…

So I remain calm and confident through all this, and that influences my work, which attracts me more than ever, just because I feel I shall succeed. Not that I shall become anything extraordinary, but “ordinary,” and then I mean by ordinary, that my work will be sound and reasonable, and will have a right to exist, and will serve to some end. I think that nothing awakens us to the reality of life so much as a true love…"

As the summer sets into fall, Van Gogh — who was always animated by the intimate dialogue between love and art — continues learning to find solace in the love he is feeling as an invaluable reward in its own right, independent of what he may or may not receive in return. He reflects:

"Since the beginning of this love I felt, that unless I gave myself up to it entirely, without afterthought, without any restriction, with all my heart, entirely and for ever, there was no chance for me whatever, and even so my chance is slight. But what is it to me whether my chance is slight or great? I mean must I consider this when I love? No — no reckoning, one loves because one loves."

By mid-November, he becomes even more attuned to the love in his own heart as a gateway to self-discovery and a new mode of being. He writes to Theo:

"If you were in love with the same sort of love as I, and, boy, why should you ever have another kind of love, then you would discover something quite new in yourself… We are used to do most of our work with our brains — with a certain diplomacy, with a certain sharp calculation. But now fall in love, and look here, you will perceive to your astonishment that there is still another force that urges us on to action, that is the heart."

In a sentiment that Henry Miller would come to echo in contemplating the vital balance of giving and receiving, and one which calls to mind poet and philosopher David Whyte’s assertion that “heartbreak is how we mature,” Van Gogh considers what the anguish of this unrequited love taught him about himself and about life’s most perennial truths:

"What kind of love was it I felt when I was twenty? … I only wanted to give, but not to receive. Foolish, wrong, exaggerated, proud, rash, for in love one must not only give, but also take, and reversing it, one must not only take but also give. Whoever deviates either to the right or to the left, he falls, there is no help for it."

Complement this particular portion of the sorrowfully stunning Ever Yours with Kafka’s beautiful and heartbreaking love letters and Charlotte Brontë on unrequited love, then revisit Nicole Krauss’s sublime letter to Van Gogh across space and time and the story of how he found his purpose.